What is it with Red Bull? extreme sport

As you know we are all about extreme sports and in our endeavours to bring you interesting news and stories we do a lot of research into all kinds of whacky things that people get up to both in their spare time and professionally. One name that keeps popping up all the time is Red Bull. Beyond the high energy drink what is it with Red Bull?

Red Bull was founded by Dietrich Mateschitz, an Austrian businessman and billionaire, whose parents were Croatian and who currently owns a 49 per cent share in the energy drinks giant, Red Bull GmbH. He was born on May 20 1944 in St. Marein im Murztal in the region of Styria.

Life was fairly ordinary for Mateschitz as he grew up in Austria. He attended the Vienna University of Economics and Business Administration and graduated with a marketing degree after ten years.

After finishing his degree, Mateschitz went on to work for Proctor & Gamble, where he was employed within their marketing department. He progressed up the career ladder to eventually become the marketing director for Blendax tooth paste. It was during one particular business trip that the initial idea for a stimulant beverage began to take shape. 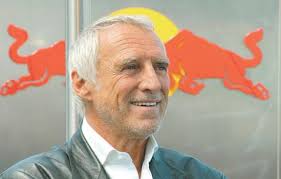 In 1982, when sitting in a hotel in Hong Kong and suffering from jetlag, Mateschitz was musing into the popularity of ‘tonic drinks’ that were big sellers in the Far East when the idea of selling similar beverages in the West came to him. He then went on to form a partnership with a couple of local businessmen who were already producing a drink called ‘Krating Daeng’ (Thai water buffalo) and it was from this that Red Bull was born.

He founded Red Bull GmbH with his Thai partners Chaleo & Chalerm Yoovidhya. It was agreed that Mateschitz would run the company and after much research, testing and set backs, the caffeinated energy drink was finally launched in Austria in 1987.

Red Bull was an instant hit in it’s native country and as sales continued to grow, it was launched in other European countries. Not everything went so swimmingly though. Sales in Germany suffered as supply couldn’t meet the demand of 1 million cans per day and the product had to be re-launched six months later. France and Denmark banned the sale of the drink due to health concerns over the high caffeine level and the use of the chemical taurine.

But health issues aside, over the years Red Bull has managed to take a strong foothold in the competitive drinks market in Europe and America. In most countries, it lines up third behind the likes of Coca-Cola and Pepsi in the total number of cans consumed. By 2008 sales of Red Bull had increased by 17% on the previous year to 3bn Euros ($4.4bn; £2.3bm) having shifted 3.5bn cans in 143 different countries. These impressive statistics are mainly due to clever marketing which has increased the profile of the drink through non-traditional advertising streams.

From the outset the Red Bull brand has been associated with a variety of glamorous and exciting sporting events such as mountain-biking, snowboarding and paragliding. With Mateschitz being the marketing strategist that he is, he saw the potential on offer by tapping into large audiences and giving the Red Bull brand a “cool” image by being linked with sports and athletes. The profile of the brand seemingly increasing as a result of the many extreme sporting events the company sponsored.

Well that won’t be all – we are bound to have missed a few out – other than the energy drink then this is what Red Bull is about – marketing. It sponsors events and individuals in these high profile sporting events – what brilliant marketing – something Mr Mateschitz obviously learnt very well during his ten years at university.

To add to the fun we thought you would appreciate a couple of videos of extreme sports that Red Bull is supporting. The first, not surprisingly from redbull is of some truly awesome action from Red Bull Rampage – mountain biking in Utah.

The second is again from redbull of the Snowscrapers event held in New York in February which was won by Shayne Pospisil.

This one from redbullusa demonstrates the humourous side of Red Bull – some crashes from soapbox racing at an event they sponsored held in Seattle.

No doubt about it – a great combination of fun, sport and adrenaline – keep up the good work Red Bull.

How Safe is Bungee Jumping?

When we bungee jumped not so long go with The Big Air Company at Victoria Falls, it seemed to us extraordinary that you were putting all your faith in a bit of strapping around your ankles and a long cord

A little history about Mountain Running

Kilian Jornet Burgada, a man who has mastered this sport (witness the videos), speaks to the living mountain running legend, Bruno Gozzelino. Mountain running began many centuries ago and exist in the mists of myth and legend… one such legend

How Centre of Gravity Affects Your Rock Climbing Performance

How often, when rock climbing, do you snatch desperately at an elusive handhold because your body is straining with exhaustion and you need to take the pressure off your legs or your arms? Do you understand perfectly where your centre of