So what is it about extreme expeditions and families?

On 13th April 2008, David Hempleman-Adams, 51, and his daughter Camilla, 15, reached the North Pole thereby making her the youngest British female to ski to the Pole.

David, himself, has completed several record-breaking expeditions, including the adventurer’s “grand slam”: conquering the poles and the highest peak on each continent.

“When I was growing up I often wished he wasn’t an explorer because it took him away from us and I missed him,” she says. “But now I absolutely understand why he does it. It was the most wonderful experience of my life and I really can’t wait till the next time.”

And there will be a next time. Camilla’s adventure wasn’t just about breaking records, her main mission is to raise awareness among her peers about what global warming is doing to the ice packs. “You learn about it at school, but it’s easy to switch off and think, ‘Our generation didn’t cause this.’ I’m hoping that the fact that I have witnessed the beauty of the Arctic and how it’s in danger of being destroyed will make other kids sit up and listen.”

Eight months ago her father teamed up with Hollywood producer, Danielle Alexandra to set up the Polar Extreme Foundation which aims to educate teenagers about climate change. Together they are working on a movie, Polar Girl, which follows Camilla on her grueling journey. 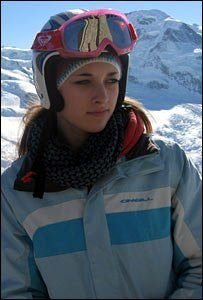 Other record-breaking attempts on the North Pole this year have run into difficulty. Ben Saunders from Plymouth had to abandon his attempt to become the fastest person to walk solo and unsupported to the North Pole because of equipment failure. Hannah McKeand from Berkshire called off her attempt to get there unaided and alone after falling through the ice.

However, apart from waking up one morning to find that their tents were surrounded by water and they were now a floating island, their expedition went without hiccup. Camilla had to pull her own 80lb sledge across 60 miles of Arctic snow and ice in temperatures of -40*C. To Camilla’s disappointment they didn’t see any polar bears and to her father’s amazement she coped magnificently. “I had no idea she had that kind of strength in her. She was brilliant and didn’t moan once – amazing for a teenager!” he said.

Camilla herself clearly enjoyed the experience. “It’s like walking on diamonds and sparkly jewels,” she said.

Smashing records runs in her family. She is the middle daughter of renowned adventurer, David, and 3 years ago her elder sister Alicia, then 15, became the youngest person to traverse the remote Arctic wilderness of Baffin Island in northern Canada. One sister to go – I wonder what she is going to pull out of the box?!

What is the Difference Between Base Jumping and Wingsuit Flying?

Kiteboarding Kits – Some Tips on What To Buy

Dwain Weston : His Last Jump in Videos – “Whatever Happens Happens”