What Should You Do When Approaching A Low-Head Dam in Canoe or Kayak?

The number of people kayaking increases every year as more and more people continue to fall in love with the sport. After all, what’s not to like about kayaking? It’s a fun sport and all you need is a kayak or a canoe.

While kayaking is a relatively safe sport (one of the reasons why more and more people adopt the sport), there are some safety precautions you must observe to make the sport remain safe for you. And if you don’t know these safety precautions, how are you going to observe them?

This article aims to educate you about one of the most dangerous situations any paddler can encounter. And that’s when approaching a low-head dam. Unfortunately, low-head dams have claimed the lives of too many people and have tragically earned the nickname “drowning machines.”

Below, you’ll learn what low-head dams are, why are they dangerous, how to avoid them, and what to do when you spot and are approaching them.

What Are Low-Head Dams And Why Are They So Dangerous?

A low-head dam is a man-made structure designed to raise the water level in a river. By raising the water level, water can reach more areas thereby improving water supply as well as irrigation. Now, that’s not a bad thing, right?

If you still need more reasons as to why you should avoid a low-head dam, here they are:

The “boil” : It’s not the angle of the drop of low-head dams that make them dangerous but the backwash current. When this current reaches the bottom, a ‘Hydraulic’ is formed by water flowing down the side of a low-head dam. Now, a hydraulic is basically an underwater whirlpool that will continue to exist as long as water flows over the head of the dam.

Now, the area in which water (and debris) are forced down in a never-ending laundry-machine spin cycle is called the boil. The boil/hydraulic is very powerful and will drag down boats, kayaks, and kayakers. It’s almost impossible to get out of a boil and death occurs in a matter of minutes or less.

You can’t withstand the powerful hydraulic force : It doesn’t matter whether you are the strongest or most experienced kayaker in the world. You are no match for the powerful forces that operate in a hydraulic/boil.

The only chance you have is to dive as deep as you possibly can on the downward stroke and attempt to swim away from the dam. The water pressure reduces the deeper you dive and you may be able to exit the boil. But this is easier said than done.

Rescue is almost impossible : The thing is that most people that enter a hydraulic/boil die in a matter of minutes and there usually isn’t just enough time for rescue teams to arrive. Even, rescue boats sometimes get dragged down by the immense force of a hydraulic.

PFDs (Personal Floatation Devices) are completely useless against boils. You should always wear your PFDs when kayaking but they offer nothing to anyone that gets caught in a boil. What can a PFD do against the powerful hydraulic force? 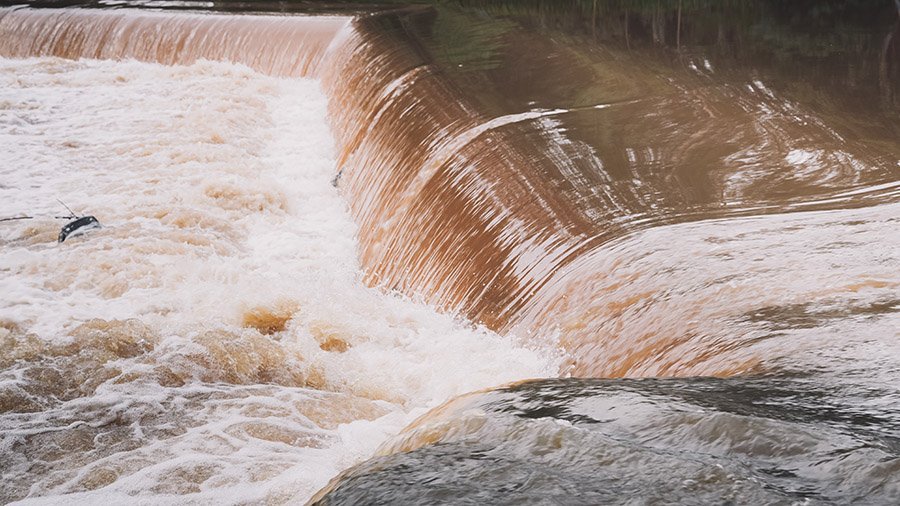 How To Avoid Low-Head Dams?

The best way to avoid low-head dams is through research. No matter how long you’ve spent around a river, chances are that you may not know it as well as you think.

There are detailed maps about dams in countries like the USA. Check out such maps and guides and gather as much information as you can kayaks as warning signs are usually placed where low-head dams exist. But you can’t rely on signs to avoid low-head dams as they may not be around every low-head. So research is still your best option for avoiding low-head dams.

What To Do When Spotting And Approaching a Low-Head Dam?

Ideally, you should never approach a low-head dam if you carried out extensive research before getting on the water. But the deed’s already been done as for one reason or the other, you are approaching a low-head dam. So what should you do?

Paddle the opposite direction

You can also paddle to the shore. This may even be safer than paddling the oppose direction. Paddle to shore and immediately get out of the water.

Portage around the dam

Okay, you’ve paddled to shore and gotten out of the water. First, say a quick prayer to whatever it is you believe in as a major disaster has just been avoided. Now, you can transport your vessel on the bank and get around the dam. This will be a lot easier if you have a kayak cart. Travel a safe distance after the dam before getting back on the water.

The sport you so much love and adore doesn’t have to be the cause of your death. Low-head dams are to be respected and feared… a lot. No matter your level of kayaking experience, never take on a low-head dam. Turn your vessel around or get to shore as quickly as you can. And here’s a toast to you having lovely and hazard-free kayaking expeditions

What Are Kayak Scupper Plugs & Our Top Picks