Kerian Hibbs – From Fear of Water to Freediving Records

This is an incredible story of how one woman overcame her terror of water and found peace free-diving. Thank you Joy for sharing this inspirational tale with xtremesport4u.

I claim I was dragged into the sport of free diving kicking and screaming, while that is a bit dramatic it is not too far from the truth.

I developed a fear of water in 1994, after being involved with a body recovery. I was a member of the local fire service recovering the body of an experienced Scuba Diver, this wasn’t the first body recovery I had been involved in, but it was the one that would change the way I viewed water for a very very long time.

Since that time I never got into the water, sure I would dip my toes in it at the beach, and I would get into the swimming pool with the kids, but I had no interest in going under the surface at all, not even putting my face in the water, all for fear of never coming back.

2 years ago, after being exposed to free diving as part of a TV show he was on, my husband announced, with much enthusiasm “I’m going to get into free diving” . I shuddered at the thought, and was secretly hoping that this “phase” would soon be over. He would come home from training all a buzz about what he had achieved and I could quickly see that he had a passion for the sport, that wasn’t going to go away quickly. With an open mind I went along with him to his weekly training session to see what all the fuss was about, unfortunately, just to hammer home my fear, the first free dive I saw (dynamic no fins) ended in a horrific blackout – another reason for me to stay clear, of the sport.

Kerian is a very accomplished free diver in his own right, after 2 short years in the sport, he holds one national record (its hard to hold a national record in New Zealand, because four of our national records are also world records!), has become the 10th person in world history to swim more than 200m underwater (dynamic) on one breath of air, and is well respected in both the local and international free diving community.

He has done this largely on his own, the most support I could give him was standing on the side of the pool, telling him what I thought looked wrong with his dives and announcing his dive times, although there were times where I just couldn’t face looking into the water. There was one day where it was all just too much and I had a panic attack – what brought it on…….the realization that I might have to jump into the water one day if he had ever pushed too hard.

When he swam his 201m DYN in comp Sept 2007, I was so proud, so excited, but also jealous of the fact that he had something that I couldn’t even begin to understand, because of this fear I had. With Kerians encouragement I started to take swimming lessons, the hardest thing for me that first day was to swim along with a kick board, and put my face in the water, I KNEW I could do it, I KNEW I was physically able to do this one small thing, and that it was just my irrational fear of doing it that was stopping me. My swim coach was amazing, over about 5 weeks, we slowly got into it, slowly managed to build up a length of the 25m pool swimming along with the kick board, leaning to breathe.

After 12 weeks the swimming term came to an end, the best I could do was 25m of a style which is symbolic of a turtle trying to do breast stroke. I knew what to do, but the fear was preventing me from putting all the bits together.

February 2008 came with a huge opportunity, Kerian had been invited to compete in an invitational only freediving competition, at Deans Blue Hole in the Bahamas, and I was asked to be medic for the event. There was no way we were going to let this opportunity pass us by. 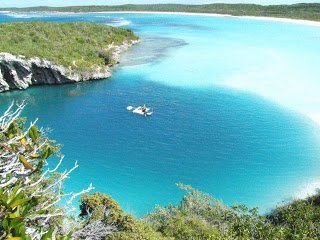 Through all the excitement and planning I started to prepare myself for having to enter the water, water that was over 200m deep. I visualized feeling the warm water around me, visualized being happy and not anxious in the water, visualized swimming out to the pontoon in the middle of Deans Blue hole where the competition would take place.

I had one huge barrier to overcome before heading off to the Bahamas , That was to face my fear head on. I had been asked to medic a New Zealand Event, the event was a constant weight event and was being held in the exact same body of water I had developed my fear in. I had to be out there in that water. Day one was ok, I could be on a boat, it was big, not rocky so as long as I wasn’t too close to the edge, I was perfectly fine. I knew that if any emergency did require me to spring into action, I would cope fine as I would be focused on the task at hand, not the surrounding water. The second day however, due to the conditions being a bit rougher than day one, and concerns for one of the divers, It made sense for me to be in the water. Looking like a marshmallow – in a wetsuit and life vest, I got onto a small platform, about 1.5m square, and got on with the job at hand. I ended the comp feeling that the monster had gotten smaller, I was shit scared, but it was manageable, the next step was to prepare myself for the Vertical Blue competition, with my small but new found confidence.

The Vertical blue comp was the pivotal point, and the start of what I will term as “my free diving career” Standing at the side of Deans Blue hole, which is absolutely stunning with soft pure white sand, and the most mesmerizing blue water, I slowly and very surely made my way into the water. I had 2 options – walk out into the bay, where the water was only waist deep for probably 75m, or get straight into the hole, which is approx 25m in diameter and 200+m deep. I decided to jump in boots and all. With the confidence I had with the floatation of the wetsuit that I found at the last competition, I made my way out to the platform. Once I stood on that platform and saw the most mind blowing sights of the blue hole, I started to understand what I had been missing. 3 or 4 days into the competition , after seeing some amazing performances by the worlds top free divers, I asked a good friend and Free diving instructor Fran Rose to show me how to “breathe up” I had made the decision to “ learn to breathe, learn to duck dive, and swim down 2m. I then asked Kerian to show me how to duck dive, and asked him to go down the line to -2m and I would give it a go.

I was terrified, but I coached myself into ignoring the terror I was feeling, and convinced myself that if anything was going to happen 2m under the surface, I would be saved by my hero anyway!

What I didn’t realise is with this tiny -2m dive I would find an inner peace and tranquility that would change my life in so many ways, it also encouraged me to try to beat the fear.

The next day when the competition was over, I tried again, one more metre, then again the following day, one more metre, and on the final day of competition, after witnessing 4 world records and 23 National records changing hands by bringing a tag up from the bottom plate, and having extended my own PB to -5m, I said to Kerian “ ok take a tag down to 10m – I’m coming down to get it” I didn’t quite make -10m, but lucky for me, my tag swum up a few metres to meet me, I came to the surface, completed my safety protocol just like a pro would, showed my tag to the Judge to roar and cheering of some very accomplished international freedivers. 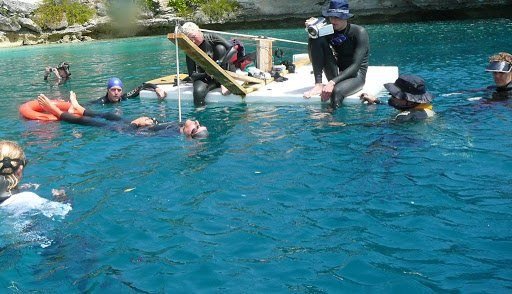 The following day, as a good bye to Deans Blue hole, a group of us went down before catching our flights, for one last visit, I got in, no wetsuit, and swam the diameter – not perfectly, but certainly a lot more gracefully than what my swimming coach had previously had to endure.

While a PB in constant weight of -6m is nothing to write home about for most freedivers, for me – it is 6 meters of potential pure fear and horror, that have turned into 6 months of the most amazing, spiritual, physical and mental development journey that I have been on. Since returning back from the Bahamas I decided to give dynamic apnea and static apnea a go – and I love it.

Kerian and I train every day at lunch time together, we critique each others styles, we coach each other through the tough bits, we safety each other in the pool. I am no longer scared of having to get underwater, in fact Kerian and I practice rescuing each other from the bottom of the pool on a regular basis – its great fun!

For me free diving is an inspiration to challenge everything. I challenged my fear of water, and found a great passion. Free diving is great for reducing my stress levels, a great way to keep fit and tone all the right bits of your body and its a very special time that I can spend with my husband, developing each others techniques and encouraging each other to do better.

What it has taught me, apart from how to hold my breath and move through the water effortlessly is to accept fear and find a way to work through it – one of the fears I had, with free diving was having my feet effectively strapped together in a monofin, I accepted that fear and worked with Kerian to take on that fear safely.

Free diving is considered an extreme sport, there are many varying perceptions about how unsafe it is, and how people have ongoing side effects from partaking in this sport. Free diving is safe if practiced safely, there are risks but the sport is heavily regulated with very strict safety protocols. There have been very few deaths from free diving, in fact there are less deaths as a result of Free diving ( not including spear fishing!) than there have been men walk on the moon, in all of history!.

So – where to for me now, with a PB of 58m – (3 months ago my goal was 25m!) and a daily training regime that includes multiple 50m dynamics, I want to push that comfort zone out. I never had any desire to enter a competition, but now, I would like to record my progress officially– you never know I might just make it onto an AIDA rankings list, my PB would put me 66th on the current world rankings, I would like to enter it in the top 50