The 14 Eight-Thousanders and Edurne Pasaban

Edurne Pasaban has summitted 12 of the 14 Eight Thousanders – the 14 independent mountains on earth that are more than 8,000 m (26,247 ft) high above sea level. She is closely followed by Gerlinde Kaltenbrunner and Nives Meroi who have both climbed 11. Only Oh Eun-Sun is ahead of her with a successful 13.

The Eight Thousanders make up an impressive list, and not surprisingly they are all found in the Himalayas and the Karakoram mountain range:

The Karakoram is a range of mountains are on the border between Pakistan and China, but claimed by India. The most common ascent routes to the summit are via Pakistan with some climbing from the China side. 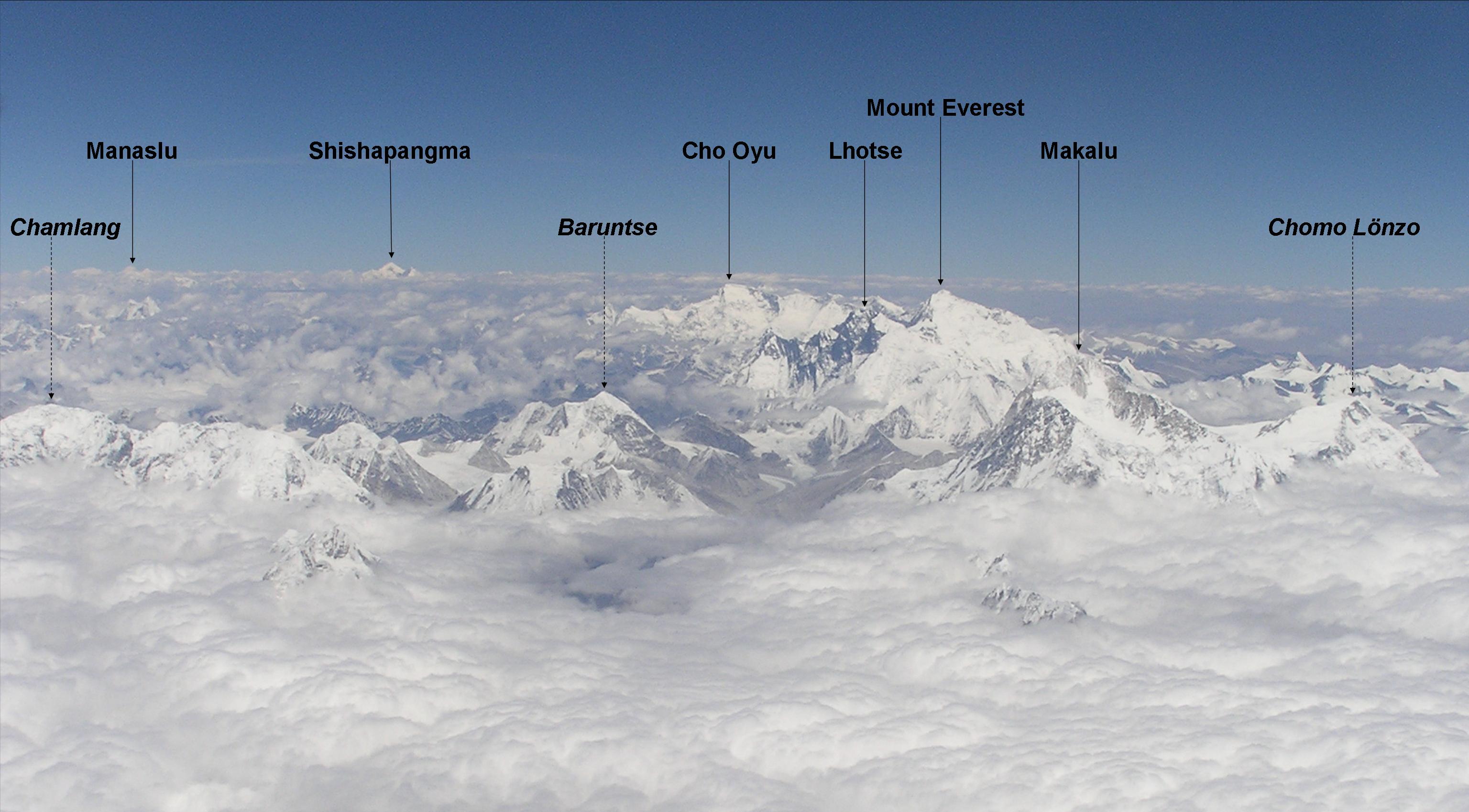 Flight over Khumbu-region; six eight-thousanders and some seven-thousanders (two identified) are visible

18 men have climbed all 14 peaks without oxygen.

The first to climb all fourteen was Reinhold Messner an Italian mountaineer and explorer from South Tyrol, often cited as the greatest mountain climber of all time… He completed the task on October 16, 1986. A year later, in 1987, Jerzy Kukuczka from Poland became the second man to accomplish this feat. The fact that only 18 men have climbed all 14 peaks shows how hazardous the feat is. Too many people have died in pursuit of this goal.

Juanito Oiarzabal, a well-known Basque mountaineer, holds the record for climbing these mountains the most times – a total of 23 times between 1985 and 2009.

And now Edurne Pasaban is hot on the trail of conquest. With 12 peaks under her belt, only Annapurna 1 and Shisha Pangma elude her.

Born in 1973 in Tolosa, Spain, Pasaban is determined to conquer the 14 peaks, but not in an all out mad dash to be the first. As she said in an interview in September 2009,  “After 11 years of Himalayan climbing, I won’t push my luck at the end. It would be a major mistake. I’d rather end up second, third or whatever… as long as I live to complete the 14×8000ers.”

Magnanimously she recognises the fact that Miss Oh (as she has been nicknamed – as against Miss Go, also from South Korea,  who fell to her death on her descent of Nanga Parbat last year, 2009),  “I think Miss Oh will summit Annapurna and become the first female to summit the 14×8000ers – that’s how things are,” she said, “I am just sorry for Gerlinde, Nives and – yeah, myself too. We’ve known and respected each other for a long time; we all fought to get funds, time and power for every mountain we climbed. The three of us forged our summits and dreams through the years, each doing it our own way, but all following a logical evolution.”

“As for Miss Oh… well, she’s been offered to star in an impressively well-funded project aiming for a world’s record, and she has accepted the role. The prize is a female world’s first – and she is about to win.”

There is a fear that there is too much pressure on female climbers to be “the first one” to complete all 14 peaks. Back  in Korea, some local climbers said that media, sponsors and the “first-ism” of society had fueled a competition between Miss Go and Miss Oh – forcing the climbers to take undue risks.

Good luck to them all, but we agree with Edurne Pasaban’s sentiments – rather be alive to enjoy your achievements than be dead because of  a desire to be “the first….”

Our condolences, of course, go to Miss Go’s family.

How Safe is Bungee Jumping?

When we bungee jumped not so long go with The Big Air Company at Victoria Falls, it seemed to us extraordinary that you were putting all your faith in a bit of strapping around your ankles and a long cord

How Centre of Gravity Affects Your Rock Climbing Performance

How often, when rock climbing, do you snatch desperately at an elusive handhold because your body is straining with exhaustion and you need to take the pressure off your legs or your arms? Do you understand perfectly where your centre of

A Solemn Warning To Wingsuit Flyers

Geoffrey Robson was a qualified mechanical engineer and mathematician who happened to love to wingsuit fly. The fantastic video below (fmalan1) taken in early April, shows Robson opening a new route from the Groot Drakenstein mountains above Boschendal, near Stellenbosch, South