the world’s most extreme waves

I thought I had fairly comprehensively covered this catagory, but on a subject like this one, I don’t think you ever can. So here are a few more seriously gnarly waves to keep you entertained…

Desert Point is a beautiful lefthand pointbreak breaking over coral. On a good day, it is one of the longest waves in the world, some say maybe even the best left in the world. This wave is for experts. However, the wave is not guaranteed and there can be long periods of flat spells – and there is very little to do there besides surf! But when it’s good – it’s very very good – long, hollow barreling, warm and consistent.

Drawbacks? the crowds are getting worse every year, you have to guard yourself against maleria, and it is adviseable to take a first aid kit with you as the closest medical access is hours away.

One of Europe’s premiere surfing destinations, Ericeira has a high density of quality surf-spots. Actually, the whole Portuguese coastline is peppered with undiscovered surfing spots, and one of the best things about surfing in this country is that it is easy to escape the crowds and find your own fabulous wave. The Cave stands out as a fine wave with all the ingredients that a dangerous wave should have, including a shallow reef. It has been described as Europe’s heaviest wave and is becoming popular with the international surfing aficianados. Thanks to ZonaRad1cal for this video.

Lunada is a wave for experienced surfers and martial arts experts! Does that sound a bit wierd? Well, apparently the natives aren’t very friendly and the police force less than interested – you have been warned! However, back to the wave… this is a world class wave and perhaps one of the best right handers in California. It is not a particularly dangerous wave but it is a great performance wave at 6ft up to 20ft swells with the length on a normal day being 50 – 150m, but on a good day 150 – 300m. It is on a rocky reef with boulders underneath.

The main drawback to this wave is that it can be very crowded. And then of course we get back to the … locals. There have been reports of slashed tyres, rocks thrown and fist fights. Sounds like a full day out!

Thanks to tfisher29 for this brief video.

“You first have to understand the set-up of El Gringo. It is a full slab set-up, a right and left ledger slamming down on a jagged rock reef. Entry and exit is via a narrow, dog-leg keyhole, with surging tides and sets that, on occasion, actually unload into the slot. There’s spiny sea-urchins on the jagged rocks. Razor sharp mussels. And a territorial pack of seals. So when you’re caught on the inside, you’re left crab-walking the jagged guts and praying the sets stop pouring in. Which, in Chile, they don’t. And if you haven’t got a board to assist your outward scramble, you’re pretty much bummed.” according to Surfing Magazine.

This is a very dangerous wave as you only have 2ft of water beneath you. It is a left and right reef break which breaks over rock. There is a very big tube/pipeline to the left – at least a 30ft ride, and a longer ride to the right – about 120ft. During the 2007’s WCT event on Gringos, pro surfers suffered broken boards, battered heads and embedded urchin spines – and these guys know what they are doing, so beware – definitely a wave for expert surfers only. GreenSurfTour posted this video. Needless to say, crowding is not a problem here!

Tarqua Bay is considered to be a regional classic and suitable for all surfers. There are virtually no surfers during the week, and the crowds at the weekend are thin. This wave is a right handed break onto a sandy bottom at the entrance to the Lagoon of Iddo in Lagos and is often a fun, wedging peak with a length of 50m. The waves are at the western end of the beach. It’s best to surf this wave between July to October, but any time a solid swell hits, it barrels.

The drawback to this wave is the pollution. 60 million litres of raw sewage and tonnes of industrial waste produced by the 8 million inhabitants of Lagos every year, flows out into the ocean. Other hazards include floating carcasses, rubbish and the occasional mugging on the beach! Not recommended for travellers but if you happen to be stuck in this part of the world, going surfing is about the only relaxing thing you will find to do. Oh dear…

I cannot find a photograph or a video for this wave… but I would suggest that the only reason it is considered a ‘dangerous’ wave is not because of its force (as it hasn’t much) but because of what might happen to you if you spend too much time in the water!


And I’ll draw this article to a close with a monster. 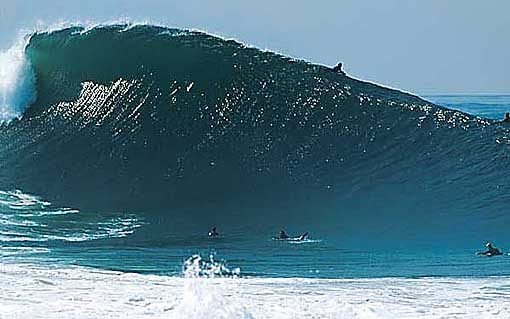 This is a wave for advanced surfers only and is considered deadly at all tides. “The Wedge is not a wave — it’s a 20-foot-plus meat grinder dreamed up by the devil himself. It heaves, bends and pulverizes in ways that good little waves aren’t supposed to act.” says Surfline.com

When supplied with a south swell of the proper size and direction, it can produce huge waves as spectacular and intimidating as any in Hawaii, Tahiti or Australia. It is a combination of two waves that merge together, creating a powerful wave which refracts the swell energy off the jetty and creates a sideways wave that slings across the beach and collides with the next wave in the set. The result is what locals fittingly call a “humping effect,” where the set waves jack, expand and release in unimaginable ways. This wave is the best known bodysurfing wave in the world, but stand-up surfers are less welcome, in fact, throughout the summer, no boards of any kind are allowed in the water except in the early morning and late evening. Thanks to ctowersey1 for this video.

The World’s Most Extreme Waves – The Rest of The World

The World’s Most Extreme Waves – The Americas